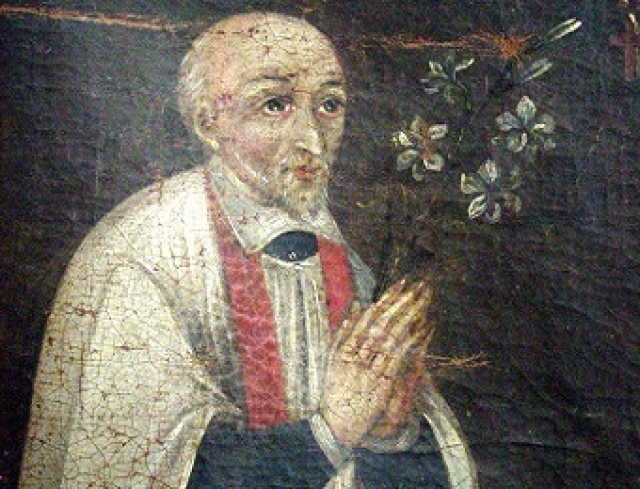 Michel Le Nobletz was born the 29th of September 1577 in Kerodern manor under the Plouguerneau parish. After his studies beside the Jesuits in Bordeaux and Agen, and at the Sorbonne in Paris, he received his priesthood in 1607. Back in Plouguerneau, he retired an entire year in a cell that he had made in the rocks beside the Trémenech beaches where he led an austere life. He then decided to become a missionary, using as a motto the words of Saint Paul: “Vae mihi, si non evangelizavero !” (Woe unto me if I don’t preach the Gospel).

He began missions in the bishoprics of Tréguier and Léon, then he went to the islands of Ouessant, Molčne and Batz, before leaving for Cornouaille in 1614. He first settled in Quimper, where he bought a small house in the Terre-au-Duc area; he preached every Sunday and holidays in the Saint Matthew church, where he taught catechism. From Quimper he would preach in the Faou, in Concarneau, in Pont-l’Abbé, in Audierne, in the Ile de Sein… He resigned his position only a few months after being appointed rector of Meilars, to settle in May 1617 in Douarnenez, a district of the Ploaré parish.

For twenty-three years he taught catechism to the faithful, visited the poor and the ill, developped new educational methods, wrote numerous Breton hymns, that tradition still preserves, and to illustrate his preaching, he invented painted cards – that prequel the “taolennou” or mission paintings. With him, Douarnenez became an ardent living place for Christian life.

He returned to the diocese of Léon in 1640, in Conquet, where he would live the last twelve years of his life: he received in 1651 or 1652 the Saviour’s passion stigmas after a life given to God and to his brothers. The 5th of May 1652, he died in the Conquet at the age of 75.

Nicknamed “ar beleg foll” (the mad priest), dom Michel Le Nobletz was the first and one of the most vigorous missionaries of the Catholic reform of Lower Brittany. Dom Michel Le Nobletz kept a journal of his missions of which we may read some fragments in a book based on his life, published by Father Antoine Verjus (La Vie de Monsieur Le Nobletz. Prestre et Missionnaire de Bretagne). His work was continued and improved by the blessed Julien Maunoir (1606-1683) (beatified the 20th of May 1951).

The beatification process of dom Michel Le Nobletz was opened in 1701 by His Grace Le Nevoux de La Brousse, bishop of Léon. It was renewed by His Grace Lamarche, bishop of Quimper and Léon the 30th of October in 1888. Two other diocesan processes examined dom Michel’s holiness, his virtues and miracles, and the absence of popular cults. An order established by pope Léon XIII on April 6th 1897, officially introduced the cause to the Sacred Congregation of Rites. Compliant to the laws of that period, a new apostolic process re-examined the cause, and then was submitted to the cardinals of the Sacred Congregation. The 14th of December 1913, Pope Pius X acknowledged the heroic virtues of dom Michel, thus clearing the way to the beatification of the Venerable dom Michel Le Nobletz, but only when a miracle will be identified.

Dom Michel receives three crowns from the Virgin Mary: the crown of virginity, the crown of spiritual master, and that of the contempt of the world (painting by Yan’ Dargent, bishop’s house of Quimper)

God, our father, you implanted in the Venerable Michel Le Nobletz the tender love for the Blessed Virgin Mary and through her intercession you bestowed upon him the grace to practice the evangelical virtues at the highest degree: you gave him the right to spend himself with ardent zeal to the service of missions in Cornouaille, Léon and Tréguier.

We humbly implore you to manifest the glory of your servant through miracles that would lead our Holy Church, our Mother, to admit him amongst the numerous beatified, thus proposing him to our devotion as a model of priest fully devoted to the proclamation of the Gospel and the salvation of the souls. Through our Lord Jesus Christ. Amen.

Many healing miracles were attributed to dom Michel during the XVIIth and XIXth century. These facts unfortunately were too old to be taken in consideration to the cause of his beatification, thus the “consulta medica” of the Sacred Congregation of Rites had them discarded because insufficiently proven.

A recent case of healing must be reported in order for the cause to be fulfilled. If an inexplicable healing occurs around you after invoking the Venerable dom Michel Le Nobletz, please report it to Quimper’s bishopric chancery, it would help in his cause of beatification:
by mail: Monsieur le Chancelier, Evęché, 3 rue de Rosmadec 29018 Quimper cédex
by e-mail: chancellerie @ diocese-quimper.fr